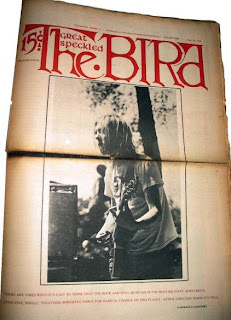 We pick up the story after the move from Jacksonville, where it all began. We played exactly one show in Jacksonville with the line up that was to become known as The Allman Brothers Band. And trust me back then no one in the band tolerated being called The Allman Brothers. When we played that show in Jacksonville Beach Duane used the name Beelzebub as our name. I'll finish the naming process by just stating that we kinda all knew that Beelzebub wasn't it, but we were at a loss as to what was IT. Phil Walden came up with The Allman Brothers due to the fact that Duane was the driving force that built it and drove it. Once Gregg joined the band and Duane absolutely would not allow it to be called The Duane Allman Band, Phil went to work selling The Brothers concept. Duane was at first very much against it. He felt that this was a band of equals and he did not want himself and his brother to become the focus of attention. However, we were still unable to come up with anything that made any sense so Duane finally relented, but the only with the caveat that there were to be no pictures of just Duane and Gregg separate from the rest of us. Of course, you have all seen the picture of Duane and Gregg on the Allman Brothers Band Album. Duane went nuclear.


Forging on: we settled into The Hippy Crash Pad on our arrival from Jacksonville either at the end of March or the first of April, 1969 and started a daily routine of spending most of the day in an old warehouse behind a barber shop on Broadway, next to the building that later became Capricorn Studios. We would spend long hours refining our skills playing together and playing all of the material that wound up on that first album. When we tired of those tunes we would simply jam, sometimes for hours on end. 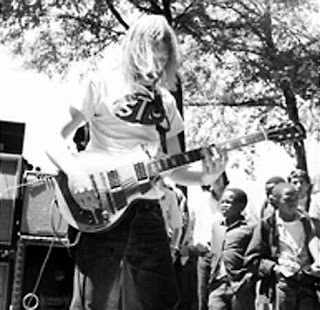 When we finally reached our limit for the day we would usually head back to the pad and drop some psilocybin. I don't know where they came from but shortly after landing in the pad someone gave us  a zip lock bag with hundreds of hits in it. Most likely this is the origin of the mushroom we all have tattooed on our right calves and the logo we use. Anywho, after the 'shrooms would kick in this usually, around 3-4am, it would lead to corkball games in the big room of the pad (with our beloved beer-filled Coke machine as third base). It also led to visits to an antebellum mansion (see the pictures on the Allman Brothers Band album) and trust me when I say that in that state of consciousness spirits do exist. We and they visited each other quite often.


After several weeks of work learning this new material we were busting to get out of that warehouse and play it for people. So..... we loaded ourselves and our equipment into our Econoline and what other rides we could glom and headed to Atlanta (later to be renamed Hotlanta, I believe we coined this term but can't prove it). We went straight to Piedmont Park and found a perfect spot to set up. It was a rather large flat space at the top of some stair with some electrical outlets within reach. We didn't ask permission, we just set up and started pouring out all of this music we had only played for ourselves up to that time. 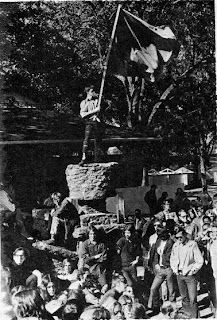 There were a few hundred people within earshot of that spot and they all came runnin. Apparently many of them also went runnin to get friends and before long those few hundred turned into a few thousand. We played and we played and goddamn it was amazing. All of those hour of playing this stuff that we knew was going to raise the bar of the musical canon came pouring out. It was church, it was electrifying, it was inspiring, it was so fucking much fun that, if we hadn't formed that brotherhood of music before that time that day galvanized it. Here's a quote from The Great Speckled Bird about that day:

The Allman Brothers Band from Macon, Georgia, are a fantastically together group of young rock and roll musicians whose music draws as heavily from the blues as the experience of young white tribesmen can without exploiting its source--a few steps farther and you get a merely talented farce like Johnny Winter. Since our generation is tribal, totally unlike our parents and grandparents and their parents, it is only natural that we would turn to the black man, whose tribal roots go so much deeper and do not have thousands of years of bullshit "civilization" to cut them off from these roots, for forms with which to relate to the new world. The history of the black man in America is the history of tribal man in an alienated, fragmented, capitalistic, literate, industrial, "I"-oriented culture; young people are simply showing good sense when they attempt to co-opt black culture (just as the dying order desperately attempts to put its stamp on the culture of its youth)--but creating and redefining our own culture in terms of the new space-age tribalism is the crucial struggle and follows as naturally from where we are at now as Grace Slick follows Patti Page. The blues, the entire complex of music which has come out of the experience of the black man in America, belongs to forms and patterns and relationships to experience of which we now have only the tiniest fraction of an inkling (even that is a hell of a lot). The black man's blues (whether manifested in Lightnin' Hopkins or Smokey Robinson and the Miracles) flows out of him, while our "blues" is wrenched out bloody like a prematurely pulled tooth. Contrast the shouting subtleties and the rock-like soul of a Mahalia Jackson with the strained histrionics of a Janis Joplin (who, somewhere down under her package, probably does have some soul of her own). Art is not a product, it is a process: the blues--whether country or urban, acoustic or electric, raw or commercial--cannot be copied from records or concerts or books on black culture. The musical language of the black man cannot be co-opted simply because it happens to be powerful and sings of things we are just now recognizing as more valid than what we have been hung up in for centuries. Our music must develop its own power, its own forms, its own patterns of relationship with our tribal roots and our space-age technology in an unbroken line all the way down into our preliterate origins and all the way out into unknown galaxies.
The Allman Brothers know all this, and a lot more. 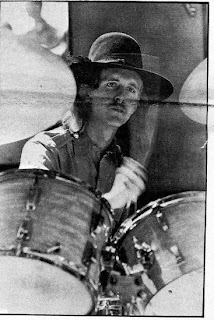 After that first Sunday, and amazingly we had no problems with police, or any other of Atlanta's power elite. Everyone was so happy and peaceful they felt like this was a good way to try and bridge the gap that would occasionally flare up into violence. When we finished some people were so transfixed they simply laid down and spent the night there. Others made sure that the place was cleaned up. Of course the next Sunday we went back and there was a shit load more folks than were there the week before as well as a couple of other Atlanta bands that wanted to play. This grew into a weekly event that went from that little place to a big flatbed stage set up on the end of a very large field that someone provided complete with a massive generator.  Plus many more bands. The crowd grew to the level of around 10,000 after a few weeks and I don't recall a single incident of violence in all the months that this magical thing continued. 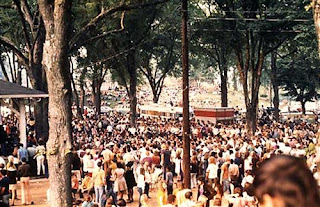 This is a picture of the very last Piedmont Park free concert in September 1970. By this time we had started touring and we weren't there every Sunday, but the show went on with The Hampton Grease Band and a ton of other groups keeping the vibe alive. These were magical days. They set the tone for who and what we were to be until Duane's death. We averaged in excess of  250 shows per year for the next two years and if we had a Sunday with nothing to do we would go find a park and do exactly what we did that day in May, 1969, in Piedmont Park. We did this all over the USA.
It is truly a sad fact that this can not happen again. At least it cannot happen now. Before we could play the show there with Dave Matthews two years ago a fortune was spent in permits, insurance, security, port-o-potties, you name it. I am just so very very glad that at one time, for a magical moment,  it did happen and I was a part of it. For all of you that were also a part of it you know exactly what I mean. This would be a far better place to live if events like this were still a part of who we are. Maybe one day it will. We can hope. 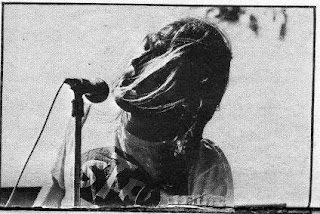