The Conversation MUST Begin 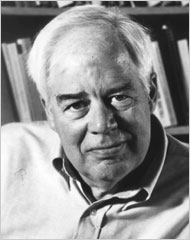 I have been thinking about this subject off and on for over a decade now. The picture is of an American "neo" pragmatist philosopher that I believe gives us a way to begin an evolution in our communication that could save us from ourselves. His name is Richard Rorty. He died June, 2007.

Anyone that is paying attention has to see that currently we are STUCK. Our leaders cannot lead because both sides believe that they know the Truth and that the other side is clueless. I will also add that it is my belief that this problem is much more prevalent and we are suffering far greater consequences because of of this mind set with the far right (call it the Tea Party). Never in my wildest imaginings would I have ever believed I would see what I have seen the last few days: Tea Partiers and others from the extreme right actually celebrating the down grading of the USA and the market crash. They take (indeed celebrate) full credit for causing it. There is one Tea Party congressman that railed, after raising the debt ceiling settlement (in which John Boehner said he got 98% of what he wanted) who said "if we hadn't gotten our way we would have brought it all down." This is the stuff of horror flicks not patriots that care about the United States of America. Where and what would we be doing right now if that horrendous agreement had not been reached and he and his peers had followed through with their threat? Imagine a world in total chaos, not just us, that is what he said he was going to give us. Apparently somebody believed him.

Richard Rorty was a controversial thinker and, especially in academia, had his detractors. If you think about what he says he does take the wind out of the sails of many people that are convinced they have their heads wrapped around THE TRUTH.

I believe one statement of his truly sums up what he was about and why his philosophy could help us.


we see knowledge as a matter of conversation and of social practice, rather than as an attempt to mirror nature (Philosophy and the Mirror of Nature, 1979)
In other words if we don't stop the DEBATE and begin a CONVERSATION we have no way out of the gridlock we are currently in. No one has this "mirror of nature" i.e THE TRUTH. If you truly believe that Michelle Bachmann talks to god and knows The Truth from those conversations then you MUST either open your mind to other views or remove yourself from the discourse. The vast majority of us do not accept this as reality. We have other world views and if we allow the Bachmann's to take over the discourse then we are in a world of hurt. In fact I would say that to some extent we already have and we most certainly are.  It is this closed-mindedness that has brought us here and it is going to take the opposite i.e. open-mindedness to get us out.

Rorty wrote, in essence, that philosophers since Thales of Miletus (considered the first philosopher) through Socrates, Plato, Descartes, Hume, Foucault, etc, etc: The Philosophers, have produced their versions of capital T Truth. According to Rorty none of these or any of the other great minds that have attempted to reason Truth out of their limited vocabularies, knowledge, experiences, etc have ever produced anything that isn't basically trivial, that couldn't be worked out with as much validity by anyone.

A monumental example of this at work was what happened to academia in the 13th century when Thomas Aquinas declared Aristotle  THE TRUTH to end all other truths. This led to over three hundred years of Aristotelian Scholasticism as the only course of study allowed in western universities. All that was allowed was interpretation of Aristotle. Questioning was heresy and many were tortured and killed for doing so.

Any of you that have participated in debate know how it is done. You take a side, you don't even have to believe in it, then you make your case for why your side is the Truth. Like sports for physical fitness, this is great exercise for mental fitness. Debate however is more of a winner take all proposition, like football. If government is more interested in making sure that its side wins then who is looking out for the governed? It is a course for the collapse of a society when debate is used  as the form of communication by its government rather than some form of conversation. We are seeing the results of this right now. The Tea Party laid down its version of The Truth and said this is it. You will do things by our Truth or we will "bring it all down." Pick up any paper or watch any news program, even Fox, to see the results. Progressives have played their parts in this fiasco too, but the current mess is coming from the extreme right.

I would strongly suggest giving Rorty some study. If his writings are difficult for you then find a synopsis that is understandable and get as far into his opinions as you can. We have to begin a conversation and RIGHT NOW!

For an example of what things may look like if we were to follow the writings of Rorty read the following: