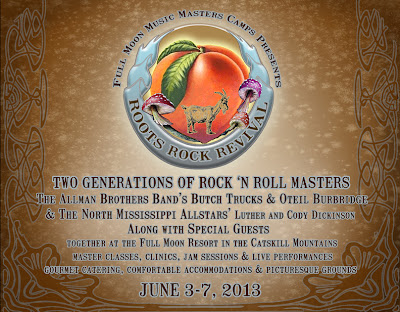 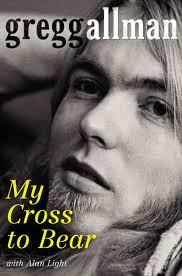 I finished Gregory's book a couple of days ago and I was stunned. It was obviously a book about 45+ years that I have been a part of and so much of it was so familiar. Reliving a lot of it through Gregg ranged from tears to raging laughter and pretty much every emotion in between. What stunned me was how open to his inner self Gregg is in the book. I am still taking in a lot of what he had to say but I just can't say enough how proud I am of Gregg right now. It took a ton of courage for him to open up the way he has in this book. You want to know how incredible it is to play music, be a member of the ABB in all of its formations and how horrible being a celebrity can be, read this book.  He lays it all on the line and pulls no punches on himself. Gregory, you da man!!!   GREAT JOB.

It has been a while since I've had the time to post here. In case you don't know it we are recreating Moogis and that has kept me very busy. Moogis will go live for the Peach Festival in August. It will be free and we intend to stream a new concert everyday from then on. We'll draw from our archives early on as we build out places to stream live from around the country. It is our hope that within a few months you'll be able to watch a "live" concert every night. For free. Go to www.moogis.com and sign up.

One more thing: I just finished a video as practice for an  instructional DVD I'll do later this year. If you'd like to know how I play Whippin Post check this out:   http://www.youtube.com/watch?v=MNGQudbM3OQ


That's all for now. I would answer some of the more outlandish comments that have been posted to the blog, but I won't. I've already said it enough: if you don't like what I have to say, either respond with your version or just don't come here. Simply calling me names does no one any good, or harm, for that matter.

Been a while. I seem to be going through a period of trying my best to listen rather than yell. I have, however, been reading the posts in response to my blogs. The dude that keeps saying that we were playing clubs and dives and that only the emergence of Lynyrd Skynyrd kept us around? Well if he wants to take the time the "facts" are readily available. Just do a bit of research. I have no problem with the music and accomplishments of Skynyrd and I am happy that they were able to do what they have done. Whether you like their music or ours or both is simply a matter of taste, and is your opinion of what you think is worth your time listening to. We are all entitled to our own opinions. We are not entitled to our own facts. Facts are stubborn things that remain true whether we believe in them or not. That dude's statements simply do not correspond with the facts.

Like evolution. You can say as many times as you like that you "don't believe in evolution." Guess what? It is not up for belief. Evolution is a fact that remains true whether you believe in it or not. Kinda like saying I don't believe in the reality of that tree that's about to pound me into the ground. That tree cares not one whit about your "belief." If it's falling and you are under it you're going to get pounded. Our tonsils were once glands that secreted digestive fluids back before we cooked our food. Fact, not up for debate. Once we began cooking food and stopped eating raw meat, hair and bones, tonsils became unnecessary. They stopped secreting any fluids and began to evolve out of the human anatomy. If we can survive long enough babies will be born, indeed some are already being born, without tonsils. This is one example of evolution at work. Not up for debate: FACT

As for my comments about what music I listen to; what possible difference could this make on any of your lives? Of course I have listened to Derek's records and Warren's and Gregg's. They are all excellent. What it comes down to is music is the greatest force in my life, when I am PLAYING it. When I have the time to listen I usually don't listen to any music. Most of my listening time is when I am driving around in my car. I have a collection of hundreds of college lectures from a company called "The Teaching Company." They are lectures from the best college professors from the best universities in the US and even a couple from abroad. Most of my collection is about philosophy, literature and the history of the West. The picture of Will is there simply because I think he is the most important figure in western literature. Like him or hate him, all writers since the early 17th century were influenced by him. I have recently ordered several series of lectures about the philosophy, literature and history of the East and Middle East. I am really looking forward to listening to them and learning more about the world I live in.

I did not complete college and maybe this need for knowledge is from a deep rooted insecurity. Whatever the reason I much prefer these lectures to listening to something I would rather be DOING and that I have no insecurity in my ability to do. The people I mentioned, "Trane, Miles, etc" are the DVDs I put on when I have a party or people over for dinner or anytime when there needs to be some music playing. What I choose to listen to when I am alone is my choice and has absolutely no impact on any of your lives. Why you think you need to bust my chops for my choice is beyond me. You listen to the music you choose, believe in the religion or philosophy you choose and they have no effect on me. Your choice. My choice.

Maybe I am not as opinionated as I was when I started this thing. Maybe that's a good thing. Perhaps it will make it more difficult for me to write future blogs. I, like all of you, am evolving.