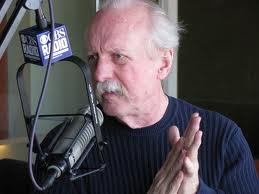 I was raised a devout Southern Baptist in the beautiful town of Jackass Flats (better known as Jacksonville, Florida). Growing up, if the church doors were open, my young ass was in it, no questions asked. Worst of all I bought, lock, stock and barrel all of the dogmatic propaganda that was being shoved into my as yet unformed noggin. In 1965 I finally left home and headed off to the booming metropolis of Tallahassee and Florida State University where I was to spend about a year and a half majoring in staying out of Vietnam. Although I did receive that degree, sic, FSU didn't seem to like the fact that I refused to attend their classes and after the first trimester of 1967 they asked me to get my lazy ass off of their campus. During this time I joined up with two acquaintances (later to become two of the best friends of my life) from high school (Scott Boyer and David Brown) and we formed The Bitter Ind. I guess we were the very first hippies at FSU. We learned everything The Birds, Bob Dylan, The Lovin' Spoonful did along with some Buffalo Springfield, Jefferson Airplane and even one Rolling Stones tune thrown into the mix. While this was happening on a macro level my brain went through a very radical change on a micro level. I started to think for myself for the first time in my life and after several months of serious consideration I got really pissed at all of that crap that had been shoved into me. I went from Christian to atheist at light speed. When you take the time to really think about "God's Word" and then spend even a little time studying the "historic" bible it doesn't take a genius to realize that if one book says "It is by your faith that ye shall be known, not by your actions (from one of "Paul's Epistles)" and another book says "It is by your actions ye shall be known, not by your faith (from James)" then what I had been fed all my life about the "King James" version of the bible being the absolute "word of God" and thus infallible just ain't true (I trust you noticed that both of those passages can't be true, ergo one is false and ergo there is at least one false statement in the bible). I have spent a good deal of the 45+ years since that epiphany studying the real history of the origins and evolution of Christianity and it sure ain't purty. I can't find a single other cause for more suffering, pain and death in the history of the Western World. Now I find myself watching Michelle Bachmann (ya know she really does have a very slim chance) spout that crap and watch people all over this country eat it up. Segue to politics.


I would consider myself a liberal. I know who the three philosophers are that Jefferson used as the basis for the US Constitution (a little test, do you?). For example who wrote, "All men are created equal. That they are endowed by their creator with certain unalienable Rights, that among these are life, liberty and the pursuit of happiness?" (I do know that's from the Declaration, not the Constitution, but the influences are the same). Hint: it wasn't Mr. Jefferson. I have studied some philosophy and will continue to do so until the day I die. I believe it is one of the purposes in my life to learn something new everyday. Now it seems that everyday I read the newspaper (The New York Times, and The Palm Beach Post) or watch CNN, MSNBC or one of the network news shows. Just can't abide more than a couple of minutes of Fox without destroying my TV, 'sides anyone that considers Fox "news" is a big part of the problem I am going to yap about. The art of "fact-checking" seems to have been removed from that arm of the GOP.

My rag today is a very simple one, but I believe is at the root of why we are going down the tubes. I learned in high school that the US government was built on a tripartite system. (if you don't know what that means, go look it up). The other day Obama was doing a "Tweet" conference and he received a tweet from Boehner saying "We gave you all that money now where are the jobs?" (or something to that effect). I was blown away by how Obama let Boehner get away with framing even that simple tweet. First off, "all that money" was a fraction of what Obama asked for and (as we have since learned was needed) 40% of "all of that money" were tax cuts (See the Bush years for what tax cuts do for job growth, BTW I will not go dig up charts, statistics, etc, you can do that yourself, but they fully support the statement that tax cuts do not create jobs). Obama's response to Boehner was some blah, blah about what he has done. He should have used that opportunity and the many others like it to remind us all that he is the President. He is the head of the executive arm of our system. It is not his job to write laws. A very simple response would have been: Mr. Speaker your house has passed exactly 20 bills since its beginning. Not one of these bills have dealt with anything of any real import (three were just bills naming public buildings). It is your job as the legislature to legislate. You did pass an extremely watered down version of the stimulus I asked for soon after taking office. Now as soon as you can put any kind of jobs bill on my desk that makes any sense I will be glad to sign it. Getting it to me is your job, not mine. I will continue to try and set the agenda, but in the end you must take responsibility for congresses lack of action and stop doing all in your power to make me look like bad guy. Are you and your fellow Republicans really prepared to let this country go down the tubes just to make sure I am not re-elected? It sure looks that way to me. I guess the final statement is my personal view and I doubt if Obama really should be quite that in your face, but I do think he had better start teaching the American public a few lessons in basic civics, seems no one else wants to.
Posted by Butch Trucks at 12:45 PM