A Chill Pill From The ABB While The Fools Fiddle 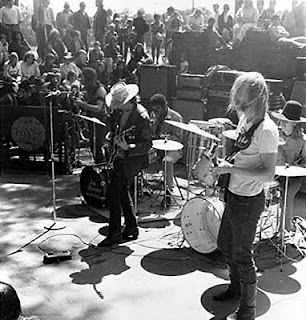 I am encouraged by the last couple of days. It seems that the people who came here once just to spew some venom my way have receded to whatever den they came out of. Obviously the last piece was my opinion and "need I say it" not everyone shares it. What was great was the level of civility that was maintained while we discussed our differences. If only, blah, blah , blah. You can fill in those blahs for yourselves.

For those of you that didn't see the video and those that came back to see it again, I am very, very sorry but it seems that we don't own that video. The dude that does does not want it up and insisted that I take it down. There are plans for a long form film about the ABB that should include this one and several others from Byron. For those that saw it I hope you enjoyed it and here is the story without further editing.

Today I have the urge to ramble a bit on  where my life went after the place I left it at the end of my tribute to Duane. We are just beginning rehearsals, with "Trouble No More" being the first song we learned and Duane calling Gregg to get to Jacksonville ASAP. We pick things up with the next thing we started working on: Spencer Davis' "Don't Want Ya No More". I have no recollection (sorry Rupert) of who or how that "Don't Want Ya No More"  line came up but someone, probably Duane, really liked it so we used it as a starting point for a structured jam that developed into what became one of our most used opening numbers. Our first title for it was "The Mother Fucker". If you're not familiar with it it takes the line from Davis' tune, repeats it and then we go into a transitional lick that ends by coming out of the shuffle we were playing and switching into a straight 4/4 rhythm for Gregg to play two two organ solos over. Then we just slip back into the shuffle for two guitar solos that are followed followed by a dual guitar line (first time ever for this new tool that in many ways will come to define a major part of our sound) that leads into a second guitar solo, two passes, that ends with a repeat of the earlier dual line that retards into everyone holding the final chord until Duane plays a screaming intro into a slow 12 bar blues groove. This is pretty much what we had learned when Gregg showed up.

I remember that when we played these for Gregg, he took Duane aside and whispered to him "I ain't good enough to pay in this band" Duane just looked at him and said sit your ass down (behind a brand new Hammond B-3) and within a short time Gregg gave us "Not My Cross to Bear" and those two have been paired up for eternity ever since. After Gregg realized that, not only was he good enough to "play" in this band, but that he had a few other things to contribute, he began to pull out tune after tune, Whippin' Post, Dreams, Black Hearted Woman, etc, etc and the ABB was off to the races.

We didn't stay in Jacksonville for long and within days we all piled into a white (aren't they all?) Ford Econoline and headed up to Macon, where Phil Walden was headquartered (MUCH more on him in my piece on the music business). We landed at a place owned (rented) by Twiggs Lyndon (Twiggs could be considered the very first member of the ABB) our road manager. It was a two room apartment totally devoid of any furnishings except a Coke machine that Twiggs kept filled with beer.  The idea was that if you paid a quarter for a beer then we would always have funds to refill the machine. Since we seldom had a quarter, Twiggs was always opening the machine and we seldom had funds for more beer. Somehow, not sure exactly how, it did seem to always have beer in it though. Maybe it just felt good about being used for third base when we would come in late at night after hours of rehearsal in an empty warehouse behind a barber shop on Broadway and start up a game of cork-ball. I'll explain that game in its entirety later. We played a lot of cork-ball in those days.

We threw a few mattresses around the rooms and "The Hippy Crash Pad" was formally born. I always thought it very strange that a groupp of guys with hair down their shoulders and even one black man in it was able to hang in that place (being Macon, GA, circa 1969), eat psilocybin and play ball, sliding into third base (our beloved coke machine) at 4-5am and not have the police show up and haul us all off to jail or worse. For some reason rather than call the cops, everyone in that building just moved out. One day we came back from practice and one family was moving and we lined the hallway and gave them a round of applause. They were not amused. We were ecstatic. Eventually some lovely young girls moved into the apt. across the hall and we wound up renting the apt next to "The Crash Pad". We really had a ton of fun in that place. Wesleyan College for Women supplied us with a stream of beautiful playmates, the music was well on its way to a new religion. I had begun reading "The Lord of the Rings" the day of our first rehearsal and between group gropes, cork-ball games, etc was living in the magical world of "Middle Earth". Life was as good as it gets.

By the way, it became an annual right of spring for me for the next few years that I reread Tolkien. I have probably read those books at least 20 times and seen the films even more. Maybe a piece on the "Ring" will be in order one day, we'll see. I have had many theories as to what the "ring" symbolizes and I will probably have many more. Would be nice to hear what yall think.

Gonna jump ahead a year. Don't worry, I promise to fill in 1969-1970, but I came across the above video so I'm gonna yap a bit about the "2nd Atlanta Pop Festival" held in Byron, GA., July 3, 4, 5, 1970. We were just getting started when the first Atlanta Pop Festival was held in '69, so no one really wanted us to be there except us. That was just about the time we began playing the free Sunday concerts in Piedmont Park, later on that too.

Byron was incredible. Estimates range from 150,000 to 500,000 but most rational people believe that 200,000 is probably pretty close. Whatever it was it was a shit load of people and there is little doubt that Byron was one of the launching pads for The Allman Brothers. I mean we played and played and played. When we couldn't get on the main stage, we would go across the road and jam with everyone else on the free stage they thought would satisfy everyone and keep them from tearing down the fences and just coming in. WRONG!!! First day, as soon as critical mass was reached, the gates came down everyone poured in. The bands weren't paid and the promoters lost their respective asses. We could have used the bucks but, fuck it, we  were there to spread this new religion we had discovered and did we ever preach. You can see just a tiny bit from the first set in the above video. This was early in the day while we were all still relatively sober. Don't remember Duane jumping around that much. There is little doubt that he was having a ball. We played a very long set that afternoon and man was it hot. We played another set on that stage either later that day or, more likely, the next. It had been sweltering all day, with naked kids in various stages of consciousness swimming in a river near the festival site. Believe me that part of Georgia had never seen anything quite like it. It was amazing that things went as smoothly as they did. But they did. Anyway, when we got up to play that evening show the sun was still up and everyone was still sweltering but as we played a small storm moved in. About halfway through our set it started pouring. You talk about a crowd getting its second wind,  well these kids with that cool refreshing rain pouring down on them just went berserk. They all stood up started dancing throwing mud and in general really kicking into a mass of kids making a joyful noise while listening to us do the same. Well....the only cover on the stage was a huge tarp and once it filled with water it came crashing down on us with a vengeance. Of course we had to shut off all of the electric stuff, but we had two drummers. Jaimoe and I never missed a lick. We just kept playing with huge splashes of water flying up every time I hit my floor tom, This somehow raised the energy level of the crowd even higher. All the electric players started looking for and finding things to beat on and we just played and played until, after a while, it stopped raining. We turned all the electrics back on and blew that place apart. One of our truly high points early on that was followed by many more.

So went Byron. We left there, continued to tour almost without stopping for many more months. Byron, however, introduced us to the world in a big way as well as putting us in front of thousands for the first time. It was quite intoxicating. The Allman Brothers Band were taking off in every way. That three days raised the bar drastically.