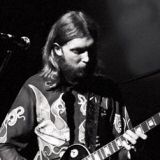 I was going to wait a day or two before writing anything more but the comment by Lacyguitar: "Wow! Duane was amazing! Allman Bros would not have existed without him." got me motivated. I am certain that many of you know that Duane put the Allman Brothers band together and was our leader. He led because that was just the way he was. He was very intelligent, totally honest, was of the highest character, morally and ethically and I would say that Duane was one of those people that, if you are lucky, you may meet one like him in your life. If you are extremely fortunate you will become friends with him, as I did.

I first met Duane when the band I was playing in, The Bitter Ind, decided to take our summer off from FSU and head to Daytona Beach to find a gig for the summer. We auditioned for damn near every club there and were met with the same results at each of them: "You guys are great but we need a band that people can dance to". We were auditioning at the last one we could find, The Martinique, when in walk "The Beatles", at least you would have thought so. They were a group of guys led by two blond headed dudes called the Allman Joys and man did the folks around Daytona think the world of them. This was the first time I laid eyes on Duane and Gregg. Well our audition finished with the usual comment from the club owner and we were sitting in the back of the place talking about putting our tails between our legs and heading back to Jacksonville when Duane came up to us and started going on and on about how much he liked our band. We told him our situation so he just said the hell with it, come on over to our house and hang for a few days until you can work something out. Well his house happened to be 100 Van Avenue, where Duane and Gregg lived with their mother. It also happened to be the place where all of the "heads" in Daytona would hang. We spent the next two or three days sleeping on couches and the floor and finally did decid to put our tails between our legs and......

Several months later, after getting a job working a warehouse for some precursor to Walmart, I got a call from Duane telling me that they were in town playing a club called "The Comic Book" and their drummer just quit would I mind playing with them till they could find a replacement. Of course I said "of course". It turned out that the manager of the club was a huge Dylan fan and since The Bitter Ind played pretty much everything Dylan ever wrote, either in his style or that of The Birds, Duane got us an audition. Well we got the job, Gregg and Duane took off, found another drummer and we played that place for over eight months.

We would run into them from time to time playing around the south and one day we were in Daytona and stopped in to see them. This was just after they had left L.A. after the fiasco called The Hour Glass. Our band was kind of stuck in a rut plus we were recording our second album in Miami and Duane said we should join forces. Well hell this was incredible. We did and worked up a bunch of material that they played and a lot that we played and started touring as The Bitter Ind, The Allman joys or The Hour Glass depending on where we were playing. We also spent some time in Miami finishing that record. Melissa was one of those recordings. This was the first time it was ever recorded. Gregg had written some other tunes and we laid them down too. The crooks from Miami we were working for finally released those recordings on Bold Records, with Duane and Gregg's picture lifted off of Idlewild South as the cover and called it "Daune and Gregg Allman". You will most definitely get a rant sometime about what I think about the music business. Well Gregg decided to head back to L.A.to try it on his own and get Duane and the other members of The Hour Glass out of their record and management contracts. Duane and I headed back to Daytona and this was when he got the call to come to Muscle Shoals and be one of their session guitarists. You can read all about what happened there from many sources.

Sometime later (I'm not great with dates) I was married, living back in Jacksonville, just about to give up on the music business and go back to college and finish my degree in math. (I guess that would have led to a nice teaching job somewhere) when there was a knock at my door and there was Duane with this muscle-bound black dude with an afro, a tank top and a damn bear tooth claw necklace around his neck. As only Duane could he said "Butch this is Jaimoe, my new drummer. Jaimoe, this is Butch, my old drummer. Well they came in, Duane hung for a while and then headed of to go see Berry Oakley and just left Jaimoe sitting there. Well my upbringing didn't really prepare me for this. If you know Jaimoe he is a man of few words. He just sat there, frowning and staring at the floor and all I could think was, "Oh my god a militant n..... he's gonna kill me. He wound up staying with me for a few weeks that trip and has become my very dear friend and partner for the 42 years since that day. What a wonderful way for a middle class, white Southern boy to be introduced to the real world. Thank you, Jaimoe.

It turned out that Duane had gotten really bored with session playing and the reason he was in Jacksonville was to start a new band. Once word got around this became the focal point for the burgeoning hippy community in Jax and we started getting together at least once a week, setting up huge piles of gear and jamming all day long. After a while Duane had pretty much decided on who he wanted for his band. Jaimoe came with him, Berry Oakley was the bass player and Berry convinced Duane that Dickey Betts would add a very cool new twist to things. Damn was Berry right! There were several drummers trying for a spot too. Jaimoe kept telling Duane that I was the one, but back then I was a pretty introverted player. Humility was what I had been taught and humility and rock and roll don't really go together. I think Duane decided that Jaimoe was right but I also think that he felt I needed an attitude adjustment if I was going to play in his band.

I will never forget the day. We were jamming in an open field surrounded by woods next to the #1 AM radio station in Jax: WAPE. Well we got into a shuffle and it really wasn't going anywhere. I did my usual "Oh god they're all looking at me" and pulled back. Duane turned around, stared me square in the eyes and played a screaming lick that just yelled "Come on mother fucker, play". To which I further retreated. Well he did it again, I pulled back again but then on the third or fourth time I realized that he was showing me up in front of all of those people and I started to get mad. I began to beat my drums like I was hittin him upside the head. We kept this up for quite a while. I mean we were locked eye to eye glaring at each other and the music just took off. In my anger, I forgot to be afraid and started playing the drums. Finally Duane smiled, pointed at me and said "there ya go". It was like he reached inside of me and flicked a switch. The light went off in my head "you can play so stop apologizing" It was that epiphany that made me capable of doing what I have done for the last 42+ years. It was Duane that caused that epiphany.

Duane Allman was the most powerful character I have ever known. After 40 years I still have dreams that I run into him. There is a part of me that will not let him go. He most certainly changed my life and touched the lives of everyone fortunate enough to be around him. He asked me to join the band. We started rehearsals and learned a few tunes "Trouble No More" being the first. Then he called his baby bro. He was absolutely right that there was no one else alive that could sing in that band.

Duane, I miss you, I love you and I always will.