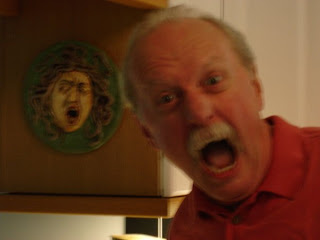 Some random thoughts about the mess in Washington ATM. Let's start with the most obvious. This is the first time since T-bills were issued to fight WWI that there has been any debate at all about raising the debt ceiling. I believe it has been raised 89 times without controversy. Seven times under George W. A single line from the congress raising the debt from ..... to ...... No problem.  To those of you that have called me and others that lean toward the democratic party and use terms like "the fool in charge" to describe Obama please tell me when in the history of the nation one party has been as intransigent as the Republican Party is being about this issue, especially when the consequences are so dire? During the Bush years, while two wars were being fought, off of the books, and the most expensive drug bill in history was passed (which included the inability to use its massive leverage to negotiate lower prices and simply gave certain drug companies huge profits), that took a budget surplus and turned it into the mess we are in right now all we heard was: "Debt doesn't matter, it's a small part of GDP". Now, all of a sudden the Republicans seem to have completely passed on any job creation that was their promise during their 2010 campaigns (Boehner's comment that a new GOP budget proposal may cost several hundred thousand jobs, but "so be it" being the obvious philosophy behind this "cut the debt at all cost" new religion of the GOP's). Now the debt is, according to the GOP, our one and only problem and be damned if any new revenue, especially from the wealthy, will help get us out of this end of times issue, it is slash and burn time. Obama is to blame for the jobs issue. Didn't you all know that? The Republicans have decided, in the interest of cutting debt, damn the consequences, to stop legislating. You did now that it is the job of the head of the executive branch to enact and pass laws, didn't ya? Oh and in spite of jobs gains continually over the last years, corporate profits that are breaking all historical records, the stock market back up in lala land, Obama didn't create this recession, but he has made it worse. Ask Mitt Romney, he'll tell you, again and again and again.

One case in point is the last jobs report that all are screaming at Obama about. Only 18,000 new jobs added. What no one seems to want to talk about is that there were 54,000 private sector jobs added. It was the slash and burn policies of conservative governors and state legislatures, as well as the federal congress that accounted for 36,000 public sector jobs being lost. Look as I may, except for a few "Blue Dog Dems" I can find only the Republicans that are doing this. The main reason I lean toward Obama and the Dems is that what the GOP is doing: cutting government spending during a recession has been proven time and time through history to always be the wrong thing to do. Nobel Prize winning economist, Paul Krugman, predicted when the Republicans cut the amount of stimulus that Obama and the Dems wanted (40% of which were tax cuts) that right about this time in 2010 the economy would again begin to slide. Well he was right.

I was told by one of you that it was WWII, not The New Deal that ended the Great Depression. As I have said before, so what? I have been told that our debt, right now, is higher than it has been since the federal government started borrowing. Bullshit!!!!! In actual dollars, maybe. Today the debt is around 24% of GDP. At the end of WWII it was over 120% of GDP. Look at what happened. When the dust settled from that debt out of it arose a juggernaut of an economy that has dominated the world for 70 years. Again, compare the economic policies under the tax increasing Bill Clinton and the tax cutting, "never saw a spending bill I didn't like or regulation I did" Bush years. That is just the recent past.

The Roman Republic started very much as we did. Italy was covered with small family farms and you had to be a land owner to be a citizen and be able to vote. By the time of Julius Caesar only a few hundred families owned all of the property in Italy and much of the rest of what Rome had become. Caesar was a populist who wanted land reform beginning with the land that he had promised to the soldiers that fought all of those years with him. Brutus, Cassius and the others that did him in were all members of that elite. De damned if Caesar was going to take one mm of what was theirs. Thus ended The Roman Republic and any chance for land reform and once Octavian took out Marc Antony and became Augustus Caesar, the first among equals, tyranny was the Roman system of government (with the real power in the Roman army) until it's demise centuries later. The change was brought about by a few grabbing all of the power and wealth and fuck everyone else. Sound familiar?

This has happened many times throughout history. Remember Marie Antoinette's "let them eat cake" shortly before those proposed cake eaters cut off her head? It is ironic that this event is one of the main motivators for the US Revolution.

There is another major trend in the Republican Party that concerns me and should concern us all. Until recently a sworn oath to protect and defend the constitution was all that any politician had to take to govern. Not too long ago Grover Norquist, leader of Americans For Tax Reform, came up with a pledge, signed by 95% of Republicans and a few Democrats that put in writing, signed,and sealed, that they would NEVER raise taxes (including obviously unwarranted tax breaks). This pledge is one of the major factors in the GOP refusing Obama's offer to cut 3-4 trillion in spending (3 to 4 times the amount the the accursed health reform law) because it did not allow them to throw in a single penny of revenue. Now you tell me how you could not, given the sad fact that all we have are Republicans and Democrats to choose from, choose the Democrats as the party of "the little guys"? Now we are seeing a growing number of oaths that are popping up, all on the Republican side. Please tell me of any oaths, other than the one taken when they are sworn into office, that the Democrats are signing. We got The Susan B. Anthony pledge to only appoint pro-lifers and cut off all funding to any agency, like Planned Parenthood (talk about hypocrisy, over 90% of what they do is to prevent unwanted pregnancies. What better way to avoid an abortion?). This one has been signed by Bachmann, Gingrich, Pawlenty. Ron Paul and Rick Santorum (if you don't know who he is, Google Santorum). We got a cut, cap and balance pledge to gut federal spending by cutting and capping spending and enacting a balanced budget amendment to the constitution signed by all of the above as well as Romney and Cain. We got The Marriage Vow that is just to weird to imagine. It includes "no Shariah Law" as well as the statement that black children were more likely, under slavery, to be a part of a nuclear family when the fact is it was against the law for slaves to get married and children were routinely taken from their mothers and sold. Bachmann and Santorum still signed it. How the hell can you govern when you take absurd pledges that remove your ability to compromise? How can you govern, if you can't compromise? It is the Replicans refusal to compromiise in the least that has us in our current pickle. That is a fact.

I agree with Paul Burke's post 100%. If we truly get "a free market" and all regulations are removed we are then totally screwed and those that have the money, e.g. the power will finish off, like Brutus, Cassius and their gang, what little is left of  Democracy. The government is our last hope. Believe it!!!

The reasoning is simple and unavoidable. When the engine of our consumer economy is losing ground and  have nothing left for the goods an services they want and more and more even their most basic needs, then companies will not be expanding, they will be firing not hiring. without demand for their good and services this is the only fiscally responsible way to go. There is only one entity that can break this cycle and that is the federal government. Big business and the most wealthy are sitting on trillions of dollars. They will continue to do so. Why should they do otherwise? A huge influx into things like mass transit, fixing our centuries old, crumbling electric grid, using this crisis in the same way we did the attack on Pearl Harbor or Sputnik and taking the lead in what must be the next global economic industry: clean energy. This would not only create all of those jobs that would lead to much greater revenue and then we could cut federal spending. Then and only then do we stand a chance of maintaining our position as the global economic leader. If we don't then better start learning Chinese. Look at what the race to the moon did for our economy. Look at what happened after WWII. Imagine what will happen if we don't do something drastic and keep heading in the direction we are headed. Imagine not raising the debt ceiling.

All the best. We got some rough road ahead I am very much afraid. Especially if the conservative agenda doesn't lose a great deal of its appeal.
Posted by Butch Trucks at 12:15 PM