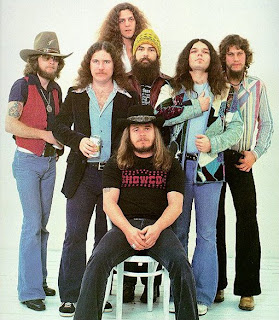 One thing that was brought to my attention yesterday was that in my moment of anger ( never write something when you are angry) I did bring others into my rant that had absolutely nothing to do with Ed King's statement. Most importantly. Lynyrd Skynyrd.

My taste in music is very limited. It includes "Trane. Miles, The Yardbird, Herbie and many others from the field of  Jazz. Mozart. Beethoven, Richard Strauss, Debussey and Ravel and numerous other composers of orchestral music. I simply do not listen to those who would be considered my peers.

I am not a fan of Skynyrd's but that is simply one man's opinion. I will not deny that they did make their contribution to the musical canon and that they do deserve respect and their place in the history of music as such.

I hereby extend my deepest and humblest apologies for including them in my angry rant aimed at Ed King. They were not in any way complicit in his statements and, as far as I know, they have had no interaction with him for a very long time.

Guys. I am sorry.

As for my statement about Sarah Palin ( although it had absolutely nothing to do with Ed King's crap) that stands. She has had far more than her 15 minutes and she is heading back to Alaska with the millions she made playing the part of a potential presidential candidate.

Peace!
Posted by Butch Trucks at 9:05 AM