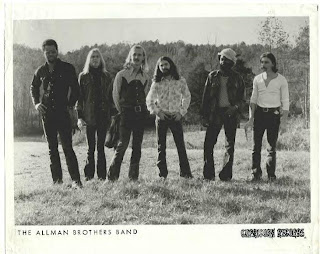 March 13 and 14, 1970, was the first time the Allman Brothers played the Warehouse in New Orleans. The place was magic. It was an old cotton warehouse on the docks where they use to store cotton for shipping. It was built of wood and had the best acoustics and the best vibes of just about any venue we played back then. December 31, 1970, was the first time we played The Warehouse on New Year's Eve and this led to us doing the same thing every New Year's Eve until Dec 31, 1972. By this time Eat a Peach had gone multi-platinum and we were selling out places like Madison Square Garden and the Spectrum so playing a 2,000 seat venue, like The Warehouse was something we did because we had a ball playing there and those New Year's Eve gigs became the stuff of legend. We loved playing there for New Years and did for three years until it closed in 1973.

We were facing New Year's 1973, without The Warehouse and management and Bill Graham came up with the idea that we play The Cow Palace in San Francisco for two nights, December 31, 1973 and January 1, 1974. Both shows sold out very quickly and it was decided to put the show up on live, coast to coast radio. This was to be and it actually did turn out to be the largest radio audience since FDR's Fireside Chats. I believe it is still the largest radio audience ever.

Anyway, here we are getting ready to play for 20,000-30,000 people live and millions on the radio and someone tells me that The Dead had showed up to jam. Well I had had an adventure once before when we played with The Dead at The Fillmore East. The Dead had a "roadie' named Owsley Stanley that was the chemist that made the LSD for most of the civilized world. It was his goal to dose every living person, That night at The Fillmore Owsley poured enough pure acid into our garbage can of beer that if you drank a beer you'd get enough LSD from the ice water around the can to get totally loaded. I had more than one beer and by the time we were half way through our show that night I was unable to play.

Upon hearing that he was around that New Year's eve at The Cow Palace I grabbed my bottle of wine, open the lead and held it close and made sure that I drank nothing else. I did not want a repeat of what had happened at The Fillmore. Well...... New Year's came after our first set. Here's a link to the radio broadcast of 1974 arriving.

So far, so good. We then kicked off our second set and about an hour or so into the set, just before Les Brers in A Minor, that was to include Jaimoe and my drum duet, my drums started just drifting off into space. When I could actually hit one it was like hitting a marshmallow. I just went, oh hell, he got me again. I turned around and there stood Bill Kreutzman looking just like Jesus, complete with the halo, and I held out my sticks and asked him if he would play my drums, I couldn't catch them. He did and went on to play what was to be my big time in the sun before an audience of millions. I moved to the side of the stage and thoroughly enjoyed the rest of the show which included the following jam with Jerry Garcia and Kreutzman still on my drums.

Years later I ran into Owsley and he told me that he had filled a water gun with LSD and got close enough to my wine bottle that was under one of my floor toms and shot it till he hit it enough to do the trick. Well it certainly did.

Thought it was time to lighten up the conversation.